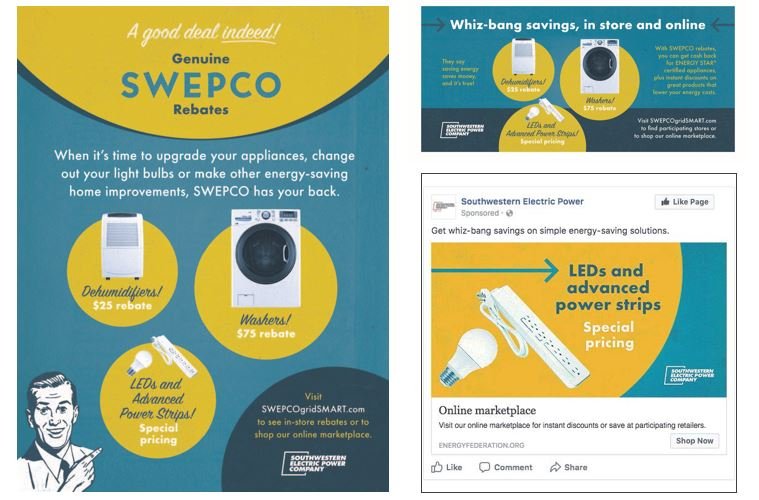 Information pollution is a product of our highly connected world, and all the competing companies, messages and ads make it challenging even for a respected utility to get their customer message heard. CLEAResult helped SWEPCO’s Arkansas programs stand out using a smart and hip integrated marketing campaign.

Genuine Rebates was a blast from the past, with a tone so different than what they’ve previously, that the client initially had reservations. Those were quickly put to rest.

The rollout of the fresh copy and design resonated with SWEPCO’s target demographic. The residential market in SWEPCO’s Arkansas service territory is diverse, and encompasses a wide range of ages, education levels, and average incomes. In order to appeal to such a wide range of customers, the CLEAResult marketing team developed a campaign that highlighted SWEPCO’s long history and deep roots in service to the Arkansas community. Our campaign reinforced that legacy with a classic 1950s look and feel, where the SWEPCO brand is synonymous with quality and trust. The messaging emphasized SWEPCO’s genuine incentives. When customers think of SWEPCO, they know they are getting a good, honest deal.

Here were early results that created a solid pipeline for the program year:

MarCom, administered by the Association of Marketing and Communications Professionals (AMCP), an international organization that manages recognition programs and whose judges are made up of industry professionals, has become one of the largest, most respected creative competitions in the world.